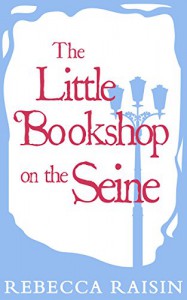 When bookshop owner Sarah Smith is offered the opportunity for a job exchange with her Parisian friend Sophie, saying yes is a no-brainer—after all, what kind of romantic would turn down six months in Paris? Sarah is sure she’s in for the experience of a lifetime—days spent surrounded by literature in a gorgeous bookshop, and the chance to watch the snow fall on the Eiffel Tower. Plus, now she can meet up with her journalist boyfriend, Ridge, when his job takes him around the globe. But her expectations cool faster than her café au lait soon after she lands in the City of Light—she’s a fish out of water in Paris. The customers are rude, her new coworkers suspicious and her relationship with Ridge has been reduced to a long-distance game of phone tag, leaving Sarah to wonder if he’ll ever put her first over his busy career. As Christmas approaches, Sarah is determined to get the shop—and her life—back in order…and make her dreams of a Parisian happily-ever-after come true.

The description on this book made me want to read it as soon as I was finished with it. When I started it though, I was afraid it was a bit whimsical for me. Once I got into it more, it made me compare it to Audrey Hepburn’s character in Sabrina and how Paris changed her life and I had a better appreciation for the book and it flowed well as I was introduced to the other characters. There were a few things in there I was scratching my head I knew they were no longer there, like the lock gate, but when I was pulling the info for this book, I saw it was originally published a few years ago, which explained those odd things. I also didn’t realize this was a continuation, which, while it wasn’t too relevant with Sarah’s situation in Paris, it would've helped me to get the relationship aspect with Ridge (as well as her friends) better. Overall, it was a sweet story about a woman who prefers to live in her books (don’t we all??) who goes to Paris and finds herself as well as her backbone. I recommend.