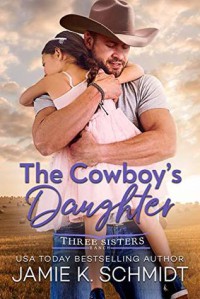 She’s moved home, but can she move on? One night with professional bull rider Trent Campbell had been everything that Kelly Sullivan had fantasized about. Unfortunately, it cost her everything. When she became pregnant, her father threw her out because she wouldn’t tell him the baby’s father was his rodeo hero—the hero who ghosted her when she tried so many times to tell him about their daughter. Trent Campbell never forgot the best night of his life. It was what kept him going when a 2,000-lbs bull ended his career and almost his life. Throughout his long recovery, thinking of Kelly and wishing he still had his stolen phone so he could contact her, were what got him through the tough days—that, and his bull-headed stubbornness that he’d not only walk again, he’d ride. When Kelly returns to Last Stand, Texas, in a last-ditch effort to keep her family from selling the Three Sisters Ranch, she has a plan to make her father proud of her again by turning part of the land into a portrait studio location. Her father, however, has already temporary leased Trent some land for a rodeo school. Kelly and Trent still have the same explosive chemistry, but now the stakes are higher. If she lets Trent into her life, it won’t only be her heart he breaks this time if he leaves, it will be their daughter’s.

This was a fast-paced secret baby story that I actually enjoyed. That trope is usually more miss than hit for me, but I really liked this story. I liked both main characters and the overall story. I recommend.