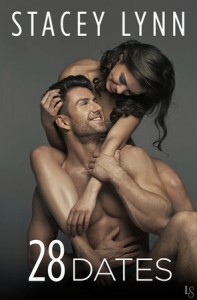 Trey  and Corbin were Caitlin’s best friends. More like older very protective brothers. Caitlin works for Trey’s  assistant, that consisted of managing his professional life down to the very second and being his pseudo mom. Caitlin had a double major in finance and marketing. Caitlin loves Trey’s friendship as well as working for him. Trey is an app developer. She had know Trey as well as Corbin for years. Trey and Corbin had saved Caitlin from a scary encounter with a drunken butthole in a stairwell in her college dorm. After that they became her protectors. Than they became her brothers. Trey doesn’t like Caitlin to use the word adorable to describe him in anyway. He is built to be in the middle of a boxing ring. He was also a huge geek. Brains and brawn with a quirk smile with a big protective streak when it came to her. Caitlin will never understand why Trey who never sees a woman longer than a week or two is obsessed with creating a dating apps. He said that’s the big money makers but she doesn’t believe that. Trey likes women, Caitlin believes his relationships don’t last because when he’s too scatterbrained and singularly focused on his his job to remember he has a woman waiting for him when he gets into his work. But Caitlin had sworn off serious relationships years ago. Trey has been trying to design an app focused long term relationships not short term physical appeal. Trey asked her just to try the app for a month. He added it wasn’t like she had to marry the guys you meet. You’ll finally move past  He Who Was Not To Be Named in the weeks following the dissolve of their relationship months ago. Maybe Trey had a point she hadn’t hooked up with anyone since Jonas and her ended. Because Trey will do anything for her , she said she’d think about it. After she did some things for Trey workwise she called it an early day and decided to go looking for lunch. She ended up outside Dirty Martini’s - the bar Jonas now owns. She hadn’t been there much in the last few months. Hard to return to your favorite place when your friends-with-benefits arrangement comes to an abrupt end. But after six months that’s called water under the bridge. Mostly Caitlin misses Jonas- his laughter and humor and how easy it was to fall not only into bed with him, but into a friendship. So while she misses him desperately, she still let him go so he could find his own happiness. She wanted that fo9r him. Continually putting herself in front of Jonas, able to look but not touch does weird things to her mental health. Like, currently making Trey’s app seem like a little better idea. Maybe Caitlin should find a new favorite place altogether. Jonas liked Ashley but not in that special way he still gets a pain in his gut everytime Caitlin walks through the door. He wasn’t over Caitlin but he wanted more. His reaction to Caitlin is everything he wants to have with Ashley. Caitlin realized Trey and and her friend Teagan were right she does need a new man. Six months is quite  the dry spell and yet every time she has an option to go home with someone , a memory of Jonas unbidden pops into her brain and all her interest in the stranger evaporates. Jonas has ruined her for sex with other men and that’s a bummer. It’s not the same as it used to be but Jonas always understood her in a way few do. With corbin and Teagan living on the coast now they are married. Trey is her only friend. And even he is a space cadet for much of the time. She only sees him once a week or so to watch football and baseball games together. Jonas broke things off with Ashley Jonas has been in love with Caitlin for almost two years. Than Jonas called Trey and asked him to stop at the bar nad have a drink on him. Trey agreed. Trey is protective of Caitlin. He and Corbin always have been. Caitlin had never said much about her past to Jonas other than her parents were rich hot shots who could barely be bothered to raise her. She’d been mailly raised by a nanny and housekeeper. Trey told Jonas how they met. He and Jonas had liked a girl and went to the girls dorm for a party. They were at the end of a hall and heard a scream . Some butthole had Caitlin against the wall . Blood was all over her nose and a corner of her mouth. The guy had beat her up up a little to stop her from screaming. Corbin and Trey beat the hell out of the man. He did touch her though. Then he also said she had went to her parents afterwards and they turned their backs on her when she went to them for help afterwards. Trey said he knew Jonas had eft caitlin because he loved her. Trey added if he wanted a real chance with her, he’s gotta know what he’s dealing with. Caitlin was all kinds of messed up in her head. Jinas asked Trey if he had his back in this. Trey said go for it you’re  good for her. Caitlin had received her first set of matches and out of the sixty five men she matches with a few did actually interest her. She went on her first date with Brett.

I loved this book. I read it in one setting as I didn’t want to put this down and seldom did. This book caught my attention from the beginning to  the very end which I absolutely loved. I really enjoyed the fact it was a woman who only wanted sex with no strings and had already been with Jonas this way for two years. It’s usually men especially walking away because the relationship wasn’t progressing the way he wanted. I loved Jonas and Caitlin together and how they interacted. I also loved Caitlin's relationship with Trey and Corbin and why it started. Also loved how Caitlin become best friends with Corbin's wife Teagan. I loved the plot and pace of this book. I loved the characters and the ins and outs of this book and I highly recommend it.