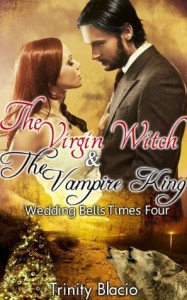 Beth wandered down an alley  searching for Nora who was her best friend. Nora had disappeared two nights ago. Whens he didn’t show up for their usual friday night out Beth knew something had happened. Beth even tried to contact Nora’s boss Deward- the Vampire King, but he was seeing no one. He didn’t care his secretary was missing.  Beth had seen him once and he was a playboy with a woman hanging off each arm. . His dark blue eyes took in everything in the room as he seemed to glide across the floor. Even his hair didn't have a strand out of place. He was so perfect. She had wanted to run to him and mess up his perfect image. She didn’t know why seeing him with someone else she had wanted  to change than into donkeys. Beth hadn’t believed she would be here on her birthday. She scanned the last place Nora had been seen, afraid of the worse for Nora. Halloween was the one day of the year she hid in her house, she was afraid the other world creatures would know she could see them. But now she was out searching for Nora . beth had a piece of Nora’s shirt and sniffed it.  Beth found out Nora had been taken by Wizards and she must find her friend before it is too late. Being part were and part witch it would help her to find Nora. The strong scent of Nora’s blood and Others weres were in the alley and than led her to the woods. She hoped Nora was alright no one else understood Beth besides Nora. Beth is afraid to unleash her powers and draw attention to herself.   Beth finds Nora who she believes is dead in the forest but Nora is actually transitioning but she doesn’t know this. Beth unleashed her powers but is stopped and protected by Edward who came upon her and Nora in the forest. . Edward tells beth the prophecy and that they must mate before midnight on All hallows eve. That doesn’t leave them much time. Beth can feel the pull deep inside that says Edward can be trusted and is telling the truth.

I liked this novella but felt it was definitely too short - if you can even call this that. But I felt this was rushed. It took under an hour to read.  I wondered why this wasn’t just added to the beginning of the first book of the series as a prelude- to Wedding Bells Times Four. This did make me curious about the first book and interested in trying the book. I would have definitely liked more background on Beth, Nora, and Edward. I just felt this was way to short presented as it was.