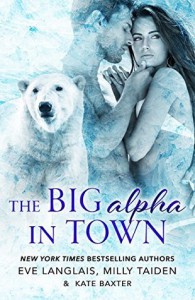 Ark told his cousin Stavros he needed him to find a woman for him. The woman was supposedly pregnant by him. Ark slid over a sealed plastic bag to his cousin. Ark wasn’t to worried as he didn’t believe the note and his cousin would take care of it when he was ready. Than he said he got a card in the mail saying: Congratulations Asshole. Its a boy. The woman you never called back.   Stavros said a DNA test will give them their answer. If it was his than ark will do the right thing or Stavros will kick shoot him. Than his cousin said he wasn’t the only one who got a card and put seven other cards on the table. Stavros said he thinks the person wants to see if any of the boys crack than the blackmail will begin. His cousin was a cop. Ark’s family are bear shifters. Jade had sent the cards trying to find the one her sister rudy had sex with at a Halloween masked party one time and got pregnant by. Jade told ruby she’d never be alone. Jade would always be there for Ruby and her son. Ark found out Jade was his mate and Ark didn’t mock the mating instinct. But what if he was ruby’s baby's’ daddy?

Owned By the Lion

Keir meets his mate and finds he has known her family for years as his mate was his bestfriends sister.  He used to be basically a manwhore and his reputation had preceded him. Ally initially wants nothing to do with Keir.  Keir is a lion shifter. Keir wants to prove to Ally- his mate he can be trusted. But it seems every ten seconds a woman from his past goes to Ally. Ally is trying to get the money to get everything her mom needs for  her cancer treatments and the trial experiment. She signs up with Mates For Hire.com to make some money, She has signed up to be a mate for two weeks. Mates For Hire matches Keir and Ally. Someone is stalking Ruby and jade and that puts than in danger. This can’t be allowed both women have to be protected.

Mia Oliver is a wood nymph and she needs a child npw. Her father told her if she doesn’t find a mate and produce a heir., he will find a mate for her. Nia has to produce an heir in order to be a member of the ruling nymphs. So Mia goes to the closest bar to find someone to impregnate her. Than she see Owen Courtney and decides he’s the one. She doesn’t want a mate she just wants a child. Owen knows Mia is his mate. Owen is second in his wolf pack. Mia’s father is on the brink of going to war with the werewolves. He plans on attacking on the next full moon. Mia tells her father she is pregnant with their heir and he says she’ll never help rule the nymphs. Owen and Mia must divert a war to be happy together.

I enjoyed all three stories. I laughed at times while reading this book. There was different things I liked about each story. I really liked the plots and pace of all three. All three stories were short but I didn’t think they lacked anything. I loved the characters and the ins and outs of these stories and i recommend them