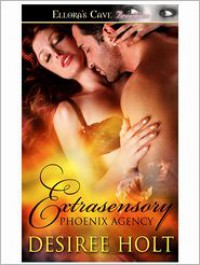 Art historian Mia Fleming has battled with skepticism about her precognitive skills all her life. But her visions about Carpenter Techtronics are so vivid she sends anonymous emails and makes an anonymous call. After having a vision of a gorgeous man that leaves her frantic with desire, Mia is shocked when the man himself shows up in her office sending her silent messages. Dan Romeo, CEO of the mysterious Phoenix Agency, is in town to help his friend Chase Carpenters track down whoever is threatening Chase’s company. When he meets Mia, he has a hard time thinking about anything but what he’d like to do behind closed doors with this intriguing woman. The electricity between Dan and Mia is so intense they find themselves in bed together before they’ve hardly completed introductions. But then bodies begin falling. As Mia’s visions escalate, so does the explosive relationship between her and Dan. When an attempt is made on Mia’s life and she is almost killed, Dan and his team must race to find the culprits before they can strike again—or put Mia down for good.

Overall this was a pretty good story, but there were a few things that annoyed one. One is a pet peeve of mine, just the reinforcement that Dan lives up to his last name. I really don’t like it when authors use this and point it out. That led to my second problem. With Dan being like that, it made it hard for me to buy that within 12 hours, he was already smitten with Mia and knew she was way more that a fling. The other thing that hurt this book was the continuity with the timeline in the first part of the book. It happened over several days but by that Monday Mia was referring to things that happened on the Friday before as yesterday. It happened at several points and was just a little irritating.