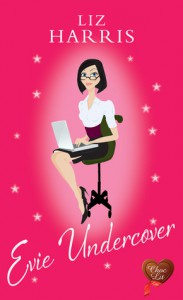 Evie wants to be an investigative reporter but the any job she could get reporting anything right now was a gossip magazine called Pure Dirt. this magazines on stories on the dirt dug up about different people.  Her job is to go undercover and try to get some dirt on a libel lawyer named Tom Hadleigh. There's a rumor he is having an affair with a married client. Tom has a perfect holiday home that needs restoring but he doesn't speak Italian. Tome needs Evie to speak with his workers so Tom can get exactly what he wants for the house. Evie is to be a girl the agency sent in to be Tom’s interpreter and assistant for a month. If Evie doesn’t right an article the magazine is happy with she will no longer have a job with the magazine and she needs the job. Evie finds she just isn’t the type of person the magazine wants to be. There are so ,many lies she is now involved with. She didn’t want to wreck Tom’s career.

I enjoyed this book. I didn’t like the lies involved but that was what Evie had to do for her job. I understood the why of the lies. I did laugh while reading this. I like the plot and the pace. I liked Evie and tom together. I also liked there was no sex involved. It was a refreshing change. This was a sweet, easy. Romantic read. I liked the characters and the ins and outs of this book and I recommend it.