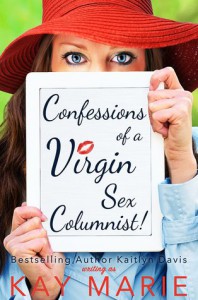 Skye thinks she is having a panic attack .Rapidly beating heart that shows no time of slowing down, inability to breathe resulting in the strangest sounds escaping her lips, fingers shaking so it took three times to press the button on the elevator, Feeling totally and completely detached from her surroundings well she does know she is in front of her apartment door but has no memory of the subway ride or the ten minute walk that got her to her apartment building. Skye feels this won’t stop , she is a farce, A complete and utter farce. This won’t be over until she tells Bridge- her roommate and best friend-  the truth, not until she tells someone the truth. Bridge was in the kitchen, Skye says she has t tell Bridge something and she didn’t want Bridge to say anything she was done because it’s freaking her out and if she doesn’t say it now she doesn’t think she ever will. Freshman year Skye reminded her when she had said she wasn’t a virgin but really she still was. After interning at the newspaper she got offered a job. They wanted her to write a column- a sex column. And Skye had said yes. Then she hears a voice but not her roommate Bridge but Bridget’s brother Oliver/Ollie. Skye is in love with Ollie always has been.  And she hasn’t seen him in four years The last time Skye and Ollie had seen each other had been the most horrifying night of Skye’s life. Ollie said he supposed Bridge forgot to tell her he got a job as a sous chef at a new steakhouse opening up on 5th Ave, he also added he probably didn’t tell her that he was moving in with them for a few weeks until he found his own place. Skye wonders if Ollie is thinking about that night four years ago. When Bridget found out she was still a virgin, she was confused as Skye had been with John for three and a half years with John in college and she had said she was a virgin when playing a game in her Freshman year. John wanted to wait until marriage but that was only when he could picture himself spending hi life with the woman. He had cheated on Skye with a band girl. Now Skye goes out with some coworkers from work. Then she met one of her coworker Blythe  brothers Patrick. Patrick and Skye start dating and advance to Patrick being her boyfriend. Skye goes to Bridget and Ollie’s childhood home for Thanksgiving.Ollie stayed in the city as holidays were very busy at the restaurant. Skye is hit with memories. Skye goes to Ollie’s room and remembers the night four years ago Ollie had picked Bridge and her up and they were drunk and she wanted Ollie so much. Bridget and Skye were to leave for their first day of college the next day. Normally Skye would be the sober one, the designated driver. But not tonight. Skye goes to Ollie’s room after Bridget has passed out. And she tells Ollie that she loves him. Then Ollie kisses her and the y end up half undressed on his bed and when she says “Ollie”that breaks the spell and he tells her she should leave their room. Then he added he stopped because he didn’t feel anything. He said to forget this ever happened and be fiends like they've always been. Skye left with tears on her cheeks and has since avoided Ollie at all costs when she could until now.

I really enjoyed this book except the ending was kind of a cliffhanger, it did leave you hanging. I know this is probably a lead to a next  book but still this did take a little enjoyment for me even though I didn’t hate it. I loved Bridget and Skye’s relationship as well as Skye’s relationship with her mom and Bridget’s parents. I loved Skye and Ollie together I loved how they interacted together also. I really enjoyed the plot ad the pace of this book. I would have liked to have rated this 4.75. I loved the characters and the ins and outs of this book and I recommend.