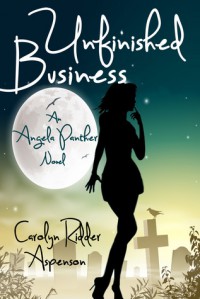 Angela loves her husband , she has a teenage daughter -Emily- and a young son-Josh, a best friend-Mel- sick father, and the ghost of her dead mother. Angel has a fairly normal family with normal family drama and issues. After her mother-Fran- died Angela is devastated but then she finds out her mom   won’t go to the light and appears to Angela and Angela thinks she is going crazy. . Angel’s husband was the love of her life. HAer mother and Angela makes sure Emily os OK when there is some serious danger to her. Fran isn’t the only ghost that appears to Angela and they obviously see Angela who can help them get closure on their human life. Fran pushes Angela to help the ghosts and offers her advice. Fran tells Angela she has unfinished business and she came back to help Angela. Angela’s dog Gracie and young son Josh can see Fran also. Angela gets use to seeing her mom;s ghost and her ability also grows and now she sees ghosts wherever she goes and Angela feels the responsibility to try to help the ghosts.

I enjoyed this book I liked Angela and her family.and how they normal they are other than Angela seeing first her mother’s ghost then other dead people’s ghost. I think this should have been in Angela’s POV. I liked that Angela freaked out a little when she seen her mother's ghost and then there ghost. I liked the author handled the problem of drugs and peer pressure. I choked up at ties while reading this. I love hoe Angela and Mel interacted with each other. I really liked the plot. I loved the characters and the ins and outs of this book and recommend it.