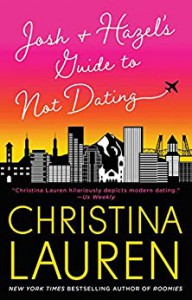 Anyone who knew Hazel in college might be horrified to learn she taught eight year old third graders. SHazel believes she is great for this as she is not afraid to make a fool of herself. And there’s something about an eight year olds brain that resonates with  Hazel on a spiritual level .Emily is Hazel’s best friend and a fellow teacher though Emily teaches fifth grade and is married to the principal-Dave- of the school she works at-Riverton. It was the last day of school and Hazel wa taking the stuff off the walls in her room when  Emily stops in. Emily let Hazel know that there was an opening for a third grade teacher and Hazel had applied and she knew she had an inside edge as the principal was her best friends husband but she was still waiting to hear that she had got the position. Emily and Hazel had met nine months ago in an online political forum, Then they met for coffee several times. The soon became best friends. Emily stopped in to ask in Hazel as coming ot her barbecue that night to make sure Hazel hadn’t forgotten. Hazel is talking with Emily and the other third grade teachers that may soon be her coworkers and they were talking about boobs then Hazel heard a voice and It’s Josh from college who she had always believed was perfect. It turned out Josh was Emily’s brother.  Josh has a girlfriend named Tabitha that he calls Tabby who had moved to LA for her job dream at a fashion magazine and they fly back and forth to see each other but Tabby has been unable to make it back to Portland three out of four ties as she has said there has been work emergencies and she had to work late or all weekend. Emily comes out and says she doesn't think he and Tabby have a lot in common and when Josh thinks about it usually they have sex and not don’t do much els together. But Josh made it clear he and Hazel were incapable when his sister said Josh needed more fun in his life and Hazel was fun. Then Hazel asked if she could give Josh her number in case he was down about Tabby not coming home and they could hang out together. The Hazel called asked Josh if he wanted to come over for lunch which he agreed to and she just made pbj as she is a horrible cook. Josh is a physical therapist. While at Hazel’s for lunch Josh gets a dirty text from Tabby and she never talks that way to him and it was about coming over for sex also she would have had to fly and miss work on Monday something she had never done. When Josh texted her if she had been planning to fly out after awhile she texted him back and said she was going to surprise him. Josh and Tabby had been together for two years.  Tabby texted Josh and asked him to come to L A that they needed to talk so Josh cleared his schedule for two weeks to fly out and be with Tabby. Hazels’ bathroom pipe burst and flooded her apartment Josh let her go rto his house with her dog Whinny as she had nowhere to go.When Josh got to L A Tabby told him she had been seeing someone else also before she left for L A she had moved out to L A to be closer to the guy and he had helped her get her job. The guy knew about Josh. Tabby wanted to stills see both men but that wasn’t Josh’s way in a relationship. Josh flew back home ad him and hazel started setting up blind dates for each other. Each one was worse than the one before. One night they both were drunk and had sex together.

I loved this book it is one of my new favorites. I laughed out loud while reading this and that is rare when I am reading. I choked up at times also. I loved Josh and Haze together and how they interacted. I loved how they got close after seeing each other again after so long after college and became best friends and went form there. Hazel so deserved a HEA. I loved how Hazel and Josh met in college when she threw up on his shoe. I liked how Tyler came back in her life and acted sweet but in reality was still a butthole and then Josh told him to  get bent. I loved Hazels and her moms uniqueness. I love the plot and pace and didn’t want to put this down. This book had me hooked form the first page until the last and I loved the ending. I also loved that Josh was honored to take his aging parents to live with him. I loved the characters and the ins and outs of this book and I highly recommend it.