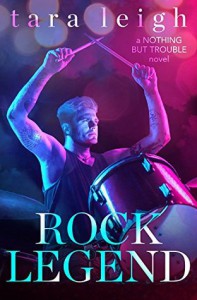 Piper and Delaney had known each other since nursery school. Piper had not been very nice to Delaney at times and had done nothing to deserve Delaney’s concern or friendship. Piper had secrets to keep and couldn’t afford to let her guard down for a minute. Being friends with a girl like Delaney - someone who cared about more than just clothing labels and boyfriend of the month- terrified Piper. Yet crazily enough Delaney was now Piper’s closest and only friend. Piper was a PR assistant for one of the hottest talent managers- Travis  in Hollywood. Piper had yet to master work-life balance. Delaney was flying out to go to Nothing But Trouble’s show. Delaney’s boyfriend was Shane who was the frontman band. Travis ended up being the reason why Delaney and Piper reconnected. Once Delaney and Shane got together Piper was assigned to manage Delaney’s introduction to Shane’s possessive fans. Rock stars weren’t Piper’s thing - not anymore. Adam was Piper's ex as of twenty minutes ago. He showed up at her car and tapped on the window and Piper ignored him and drove away. Landon was the drummer for Nothing But Trouble and this was the most successful band of the decade. Landon was living the dream except when he wasn’t on stage or in the recording studio it was more of a nightmare. Landon had a lot of luggage he was carrying from his past. Yet he remembers the girl he had let get away her name was Piper and Landon had met Piper when she was a freshman in college they had two wonderful months together - the best of their lives so far. Piper even though Landon may be the one. But then Landon had to choose the band or Piper and Landon chose the band but had regretted that chose in the end. Landon had became a man whore who drank and used drugs a lot and slept with several women. Piper had grown up never doing enough or anything right as far as her father was concerned. Six years later and Piper is trying to keep her distance from Landon. But then after a concert Piper and Landon came face to face. Landon is totally surprised to see Landon yet oddly enough he finally felt whole whe he had felt something was missing and that something was Piper. After one of Landon’s very drunken nights Travis sent Piper to babysit Landon.

I enjoyed this book. I loved Piper and Landon together but at times I got frustrated with them. I liked the plot and the pace. I liked the surprises throughout the book. I like how we are shown why Landon and Piper are as they are. Landon always felt Piper deserved better than him. I felt bad for what piper and Landon had went through in their pasts. There is very hot chemistry between Landon and Piper. I advise you to read the first book in this series so everything runs smoothly as you read this. I would have liked to rate this 4.5. I loved the characters and the ins and outs of this book and I recommend.