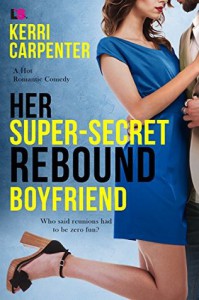 Lola’s best friend and roommate was Frankie. Lola was getting over her breakup with Mark who had dumped her for a younger,prettier, and more fun girl per Mark. Lola preferred being in a committed relationship to randomly hooking up. As a homebody Lola’s preference was to spend the night with her boyfriend cooking together, binging Netflix rather than being drunk at a bar making idle chit chat with some douchey guy who smelled like beer and way too much aftershave. Whereas Frankie loved going out. Frankie was an expert flirt and men always seemed to flock around her. Basically she was Lola’s polar opposite. Lola was a librarian . Frankie wants Lola to crash a H S reunion that wasn’t theirs  with her. Then Frankie managed to get her way as she always did and she stood outside with Lola at Kennedy H S reunion and Frankie had also made Lola over.Luke had a feeling he wasn’t going to like this his ten year H S reunion. But he had promised some friends he would make it. Then Luke sae Ryan and then his other friends from his old crew. Oliver had been Luke’s best friend since kindergarten. Luke was an architect. Luke love's to date but he doesn’t do commitment. Luke has sisters that are triplets, and all three plus his mother keep trying to set him up with someone. Luke saw Lola but her tag said her name was Kell Martindale but Luke had dated Kelli and this woman wasn’t her. So Luke goes up to Lola and starts talking to her then lets her know she is not Kelli but he won’t say anything if she will come to his family reunion next weekend as his pretend girlfriend.Luke and Lola are attracted to each other. Lola had been an only child and so had her parents and when they died young that left Lola with no family. Luke shows up  at Lola’s bocce game Monday night and even plays and they have a good time. Then they meet up again to get to know each other better for when they go to the reunion. Lola gets sad when she says she has no family and Luke kisses her. Luke felt her lips were intoxicating. Luke had kissed a lot of women but none of the kisses had felt like this. After the kiss they shared a glance of wonder , lust, and curiosity. Lola went to Luke’s reunion and Luke was the only man there until Oliver gets there later in the day. Lola had a great time and loved being with Luke’s family and wished she still had a family. But she hated the lie about the fake relationship and told Luke why. Luke ended up staying the night and sleeping and staying with Lola all week. Frankie had pulled Lola aside at the girls night as she was really worried Lola was going to be hurt as she had feelings for Luke. Then Lola went to Luke’s family again- as they had invited her at the family reunion- for a barbecue.

I loved this book, it was a great romance. I loved how close Luke was to his family and how they interacted. I loved hoe Frankie took the place of family for Lola. I was sad for how Lola’s family had passed on and left her alone. I felt like I was there with everyone and that is a tribute to this author. I also felt bad how Luke’s father abandoned his family and it still messed Luke up and hurt him. I loved Lola and Luke together and how they interacted. I also loved how Frankie and Lola interacted. I loved the plot and pace of this book. Happily I could find nothing to criticize in this book and I highly recommend