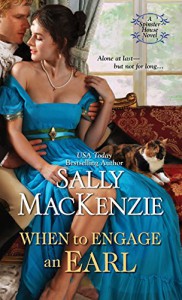 Alec was the earl of Evans rode up to his country estate . he had left the little village of Loves Bridge after he attended the weddings of his two friends -Marcus who was the Duke of Hart and nate who was the Marquess of Haywood. After that he spent the last two months wondering the Lake district alone and feeling envious his friends had found - his friends who had been trying to avoid marriage. Alec had been jilted by Lady Charlotte - while away Alec vowed to leave that part of his life in the past. He wanted a quiet restful sort of female who wouldn’t busy herself  about his or other people's affairs. He would He would shop the Marriage Mart, attend the balls, and house parties and talk to every eligible lady. Then as he got close to his home his niece rachel yelled his name which meant his sister Diana was at the hall. Diana was five years older then Alec and would notice Alec’s blues and figure it out and assemble a bunch of eager matrimonial candidates before he knew it. Diana had eight daughters and wa sagain pregnant Alec hoped this one was a boy and his brother in law Roger finally got his son and heir. Then Alec learned his mother was also at the hall, Alec decided he didn’t want to deal with his mother and decided to return to Loves Bridge. The village wanted the carnival special as it way be the Duke’s last one as his family was cursed and each male died before his heir was born. Ellen’s friend Catherine/Cat was married to the Duke. Cat was one of Ellen’s two best friends her other was Anne who married the Marquess of Haywood. Jane found she was envious of her friends even though now she had the Spinsters house to herself to live alone in. Jane was yelling at the man who owned the traveling zoo and Alec stopped and offered his assistance. After he asked Jane to tea and she took him back to the Spinsters House. Alec decides he wants Jane but he is afraid she won’t want him. Jane does like the Earl. The Spinster House is a house set aside for a lady wishing to be a spinster who can live there free and not be forced to marry. Jane had wanted to go to the Spinster House to get away from her brother and she had no interest in marriage. Jane felt feelings and attraction to Alec but she decided she wanted her freedom more. When he proposed to her jane turned Alec down. As time passed she came to regret that decision.

I read this and it was okay but not a favorite of mine. I did chuckle while reading this at times. I also advise you to read the other books in this series in order. At times I got bored with all the conflicts. I also didn’t feel the romance between Alec and jane. I am sure others will love this just really wasn’t for me.