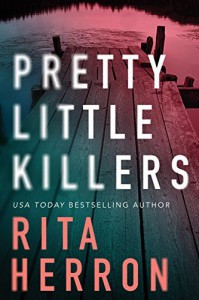 Five year old Korine wrapped her arms around her daddy’s neck. Korine got to dance on her daddy’s feet. She got a music box and a porcelain doll who Korine decided to name Ruby.  Korine was daddy’s special girl. Then daddy was shot and Korine watched him die. Before joining the FBI Korine worked as a cop in the sex crimes unit. Korine related to the to the victim and understood their desire to have justice. Korine has several family issues as her mother is severely depressed and her brother has drug problems.  Korine is now an rookie agent for the FBI. and had been teamed with FBI special agent Hatcher McGee. Korine had waited her life for the killer to return. Korine and Hatcher had a one night stand and then she never heard from him. Korine and Hatcher are still attracted to each other.   Now Hatcher and Korine are to solve a murder of a corrupt judge. It seems it might be a vigilante killer on the loose. Hatch had spent the last couple of months getting over his wife’s murder and him killing the man who had done it.  After Hatcher’s wife was murdered -even though he was asking for a divorce she was still his wife- Hatch took some time off and used alcohol to try to forget his guilt that he couldn’t get to his wife in time to save her. Hatcher is seeing her ghost everywhere. Hatcher and Korine are trying to ignore their attraction.

I really enjoyed this book. I also liked the pace and the plot. I loved that I didn’t know who the killer was until the end and it was a surprise. I choked up at times I liked how the killer tied the predators death to their crimes. I think there were too many POV’s in this book one of the few things I didn’t like in this book. There really wasn’t romance but lust in this but that was ok. I loved the twists and turns of this book. This book has: serial killers, rape, child molesters, corrupt officials, FBI, and sp much more. This was pretty dark at times but with this type of story it fit. I liked the characters and the twists and turns of this story and I recommend.