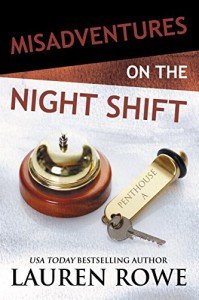 Dancia and Abby work third shift at the Rockford Hotel. During the “ dead zone” hours- two to three hours where nothing ever happened at the Rockford and Abby would get a good chance to get some studying done.Abby is going to law school part time not because she loved the idea of being a lawyer but s she won’t be a disappointment to her parents. Abby had been a wild child in her teens with a zero impulse  control. But Abby had a secret- she was also the author of a of her own sexy blog.    Abby felt Lucas Ford was the sexiest rock star she had ever seen. The man had decorated Abby’s teen walls ten years ago. He was one of the few things Abby would let interrupt hier studies. Lucas had been Abby’s teenage fantasy. Danica has known Abby for two years since she had worked at the hotel. Danica said to come look at her phone it was a sex tape of Lucas and it made Abby hotter than hot. Danicia told Abby that Lucas had a meltdown at his concert  that night and had walked off the stage and left his band there and didn’t return.  Then about three in the morning Abby got a call about renting a penthouse but the person said they would be there in two minutes and hung up before Abby could get a name or credit card information.   Then walked in a nerdy looking man who seem to fit the voice on the phone then behind him came Lucas Ford. he was renting Penthouse A for a week. Abby couldn’t believe her eyes to actually see her long time idol. Then he sits down across the lobby and lights a cigarette Abby has to go over and tell him he can’t have a lit cigarette in a hotel  lobby in Colorado Lucas calls her Abby the Asskicker bit not in a rude way.  Lucas felt he was being held back creatively by his record label. Lucas had called down and specifically asked for Abby when Abby got on the phone he wanted her to come to the penthouse she said she was still working but she could bring him some food o she made him a quick sandwich and grabbed the bottle of booze he had requested and went to his room. But he was very rude to Abby and she told him off and left his room in a huff even left her blazer there in the room. Lucas knows he must write a song that will be a hit for his record company then he can produce his fourth and final album for them.   The next time Abby comes back to work she finds out she inspired Lucas and he wrote a song and his record label even liked it and Abby became his muse.

I didn't like this book’s beginning chapters. I felt it was just crass so I didn’t even try to make myself finish this book. If I can’t at least like the beginning of a book I find I just can’t get into it no matter how it ends. I am sure someone else loved this book just wasn’t for me.