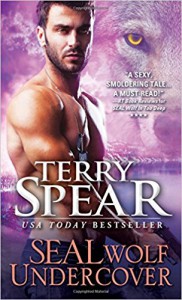 SEAL Wolf Agent Jillian Matthews planned to meet up with her brother while she started working on a case with a Jaguar United Shifter Force. When she shows up, her brother is missing and another shifter has been shot. When she hears her brother’s distress, she runs to the woods and shoots a wolf that seems intent on attacking her brother. Vaughn Greystoke didn’t expect to be shot after chasing a wolf from a cabin where his friend had been shot. He certainly didn’t expect to have to work with another wolf and a group of jaguars to try to figure out what happened, but the more he’s around Jillian, the more he can’t help but want to trust her and get a bit closer to her.

This story was ok. There were parts that I liked and parts that were meh. I think some of my problem is with the side characters. I didn’t particularly like Jillian’s brother’s actions or his interactions with Jillian. It actually changed the book from a 4 to a 3 for me. I did like Jillian and Vaughan together, especially as they pieced together how far back everything was interwoven.