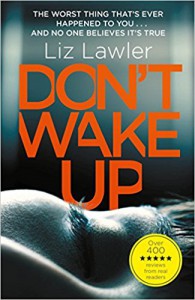 Dr. Alex Taylor wakes up alone in an operating room, blinded by bright lights,  and strapped down to the operating table with her ankles  in stirrups. She was naked and only covered with drapes and her private parts were displayed. Alec doesn’t know how she got there or why. She sees a man in surgical attire with only his eyes showing. The Alec wakes up a second time in the hospital with her colleagues all around her. Alec had been found in the parking lot unconscious with a bump on the back  her head but that was all that was wrong with her. No one would believe what Alec had to say about the operating room and the man and the threats of hurting her with hints of rape and stapling her mouth shut.  Her family, friends and colleagues tell Alec she had not been naked in an operating room with a man asking her a question. No one stands by Alec not friends, colleagues, family or even Alec’s boyfriend. They all think she is having a breakdown. Alec wonders if she is losing her mind. Then a pregnant nurse is abducted, when she is found and brought to the hospital she is no longer pregnant and what she says before she dies makes Alec believe the man who torments her thoughts was the same man who took the nurse and caused her death. The police think Alec may be a serial killer. Alec finds out it wasn’t an accident for what had happened to her , someone was upset with Alec and wants her to pay. Even though Alec was released her ordeal isn’t over and her abductor is not finished with their work.

I really loved reading this book. It kept you at the end of your chair also it was unpredictable and I really liked that. It did make you wonder what was real and what wasn’t. It is a great psychological thriller. The ending comes very quick. . It had a great plot and pace. You do keep guessing while reading this. I really loved the ending. I don’t know why no one stood by Alec. She was suppose to be a respected doctor. I loved the characters and the twists and turns and I highly recommend.