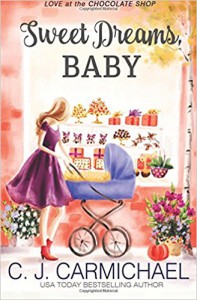 Portia had mailed a letter three weeks ago to Austin. It should have been sent a year earlier. Portia was at the door to the Cooper Mountain Chocolate Shop. Portia thought she had seen Austin, she went back inside the shop and checked on her three month old son Zavy. Portia was lucky her Aunt Sage was a mother and helped Portia learn from her. Portia’s Aunt Sage owns the chocolate business and almost everything was made by hand. Portia’s own mom  Mattie  couldn’t leave the ranch where she lived with her second husband, she been able to make a two day visit than she had to go back home.  Austin had went to the rodeo circuit for the summer when he returned Portia was gone and had just left him a note. Austin tried every way he could to get a hold of Portia but he was always blocked and never answered in any way until the letter. So when Austin received the letter from Portia saying they had to talk Austin went to her as soon as he could then he sees her coming down the street but she was pushing a baby stroller. Then Portia tells Austin the baby is his son and she named him Xavier after Austin’s beloved father. Portia father’ Wes had a big name in the rodeo circuit back when Portia and Austin were in college. Austin kew Portia’s fear was that he was like her father Wes who the rodeo was everything for and never be happy without the rodeo life. Portia had left college a year short short of her degree. Even her extremely intelligent twin sister Wren thought there was nothing more important as a good education. Portia knew her family had a point but she would never regret carrying Zavy to term and keeping him.  Austin told Portia he was going to cancel some rodeo commitments and take care of Xavier while Portia worked. But Austin also told Portia she would have to teach him how to take care of Zavy. Portia didn’t want Austin to feel trapped. Austin told Portia he couldn't imagine loving anyone else but he couldn’t but he couldn’t imagine forgiving her for keeping the fact she was pregnant and his infant son from him. Austin had his son the very next day but it wasn’t easy not really knowing his son or what to do. Austin went on to the Circle C Ranch where Portia and Zavy lived with her aunt and uncle Callen and Court Austin still loved Portia but he would have to get over it as Portia no longer Austin or she wouldn’t have cut him out of her life so cruelly and left Zavy a secret from him so long. As most everyone was out looking at the new horse barn Portia told her Aunt Sage she had eloped with Austin the summer before as Sage noticed Austin was wearing a wedding band. Then when everyone came back Portia told her family. Austin went up with Portia while she breastfed Zavy and they talked some. Austin hated the feelings Portia brought out in him, hot anger one minute, hotter desire the next. Austin had told his dad him and Portia were married after he got the letter, But Austin hadn’t told his dad about Zavy yet he deserved finding out about his first grandchild in a better way.Then Portia brought up getting a lawyer for a divorce. Austin had to get out of there though he wanted to kiss his son goodnight he didn’t want to be that close to Portia he was just too angry. Austin laid a check on the bed and told Portia when she asked that he knew Portia didn’t want to be married to him anymore but he wasn’t a dead the check was for the first three months  of child support. One of Portia’s best friend’s was Rosie and she immediately asked Portia what was wrong the next day and if Zavy was alright. Portia now knew the big mistake she had made.

I loved this story. I loved how Portia’s family helped her through a bad time and stood behind her. I loved  how Austin got to  Portia as fast as he could. I also loved how Austin reacted to his new son. I couldn’t find anything to complain about this was an easy enjoyable great romance. I love how Austin forgave Portia for not telling him sooner and how he owned up to the mistakes he had made. I loved the small town of this book. I loved the characters and all the ins and outs of this book and I highly recommend.