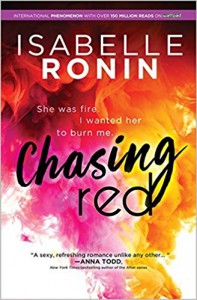 Caleb has everything- good looks, wealth, and a great future ahead of him. Caleb was also MVP for her college basketball team.Caleb’s best friend was Cameron.   Claire was trying to get Caleb yet again and she was trying to hard and Caleb looked around for Cameron or Justin to help him out of this situation as he didn’t want to hurt Claire’s feelings but Caleb was interested in finding the girl in red he had been staring at and nicknamed “Red” . They were at the club and he had been watching Red on the dance floor. Then Caleb hears someone say “ hi baby”  and wrapped her arms around his waist to get him out of Claire’s grasp and then she said he is with me and then she said lowly “ aren’t you”. She wasn’t beautiful in the classical sense but Caleb thought she was totally engaging. He put Red arms around his neck and whispered in her ear ” where have you been. I have been looking for you my whole life”. Then Red stepped away and said “ she’s gone now you can buy me a drink for saving you”. Then Caleb asked her what she wanted and Red said “something strong tonight I want to forget”. Then Caleb asked her if she wanted to leave to go somewhere where he could help her forget. Red then pushed away and said nice meeting you buutthole and then she turned and left. Caleb could not believe that Red had rejected him as that never happened. Red’s real name was Veronica. Caleb is relentless in his pursuit of Red but she won’t fall for his playboy ways. Veronica is homeless as she was kicked out of her apartment and Caleb offers to let her stay in his spare room until she gets back on her feet. Veronica had a very bad upbringing and has bad trust issues Veronica had been starved for  love and affection for a long time. Caleb slowly breaks down her walls but Veronica is too afraid to let him in her heart. And be heart again. Veronica ends up with a new best friend named Kara.

I liked this story but had mixed feelings and more on the negative side than positive side. I felt Veronica was a little too immature even with a bad past. But I did like her and Caleb together. But I did get tired of Veronica pushing Caleb away. He was being very good to her. I loved how Caleb was so devoted to Veronica - his Red-. But I also felt there was too much drama in this book yet not a whole lot of action. Sometimes I laughed and sometimes I did choke up. While reading this. I did feel there was a lot of repetition in this book. Then to top it off I was thoroughly disappointed when it ended in a cliffhanger. So as I said I had a lot of mixed feelings.