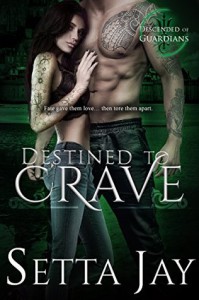 Lucy and Eiryke “Rykr” grew up together, both being descendants of Guardians and Gods. They had always been close but it wasn’t until Lucy was turning twenty that they realized they were soul mates. Being several years older that Rykr, Lucy breaks his heart and demands he stay away from her for 10 years to enjoy his youth. She had no idea the torment he would go through due to a curse he was given until she can no longer stay away from him.

This is the spin-off series of Setta Jay’s Guardians series that I devoured as they were released. I was really excited to learn that we’d be able to get more of this world she has created, a loose spin on Greek mythology. I loved getting to know Lucy and Rykr as they battle a new threat.  It was a quick read but there was plenty of hawtness, a full character feel and a complete story. I also liked the brief appearances by some of my favorite characters from her previous books. I highly recommend.