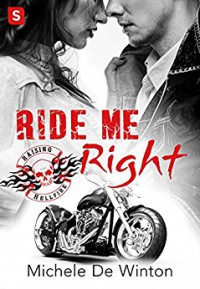 Lucy couldn’t afford to replace the wrench that someone had taken. Not now that she doesn’t have a job or a place to live. Lucy knew this day was coming but kept hoping Gav would change his mind or something would come up but no such luck. Gav said no hard feelings it just wasn’t working out with her working there. Gav added he couldn’t stop bailing Lucy out. Lucy added that she didn’t expect Gav to. Lucy’s confidence turned to stone: no job, no apartment, no money for rent, and the promise she had made to her younger sister Katie that she would have the money for Katie’s glasses at the end of the week. Lucy was not going to let her fifteen year old sister miss out on being able to see because of their whacked out mother. Lucy might not have been the bot her father wanted but she also wasn’t the placid doormat her mom wanted either. Lucy was a great mechanic.The resident biker club was the Raising Hellfire MC. Lucy had been riding with the Hell’s Boys since she hit LA . Lucy had slept with a couple of the bikers and and got a rep so she stopped having sex which was a de stress mechanism for her.What Lucy wanted was the gig of fixing the Hell’s Boys bikes permanently. Lucy wanted to fix bikes the way she knew they wanted to be fixed. She wanted enough regular income that she could make sure her younger sister Katie was okay. Lucy knew Briony- who was the owner of Wilde’s- was the only friend she could rely on not to roll her eyes at the news Lucy had lost another job. Lucy was hoping someone  needed some work on a bike since since the Hell Boys didn’t have an official mechanic or maybe Briony might have something she could do for cash until Lucy could find other work to tide her over. Jake has a newly discovered sister in Briony and he was overseeing her hotel while Briony was on her honeymoon. Jake had lost his confidence after a tragic accident in his famous stuntman skills. Jake’s nickname had been Iceman and he had been in action movies. Jake is tormented with guilt as he made an error in judgement that ended with an accident and a  stuntwomen's death and decided to take some time off and reflect on his haunted past. Jake wonders after the accident if the stunt business is really for him. While at the hotel Lucy asked about a job and then ended up drunk and decides to take a dip in the pool. Luke sees her floating in the pool and thinks Lucy is drowning and rescues her.  Lucy decides to have a one night stand. When she wakes the next day she finds out Jake is her boss as she had got a job in Housekeeping  at least until Briony gets back. Lucy’s dream was to have her own bike shop. Jake and Lucy try to resist each other but when Lucy tries to harden herself toward Jake he melts her. Jake wants to help Lucy but Lucy is used to surviving on her own. Luke is protective of Lucy and wants to keep her safe no matter what he has to do.

I liked this book a lot. I liked how Lucy is trying to make it with something she does even if it’s a male dominated field. This is a great read and has a good plot and pace. But I didn’t like how the author referred to the MC as a  gang. I like Jake and Lucy together. I also felt  that Katie added to this story even if she didn’t have a large part. At time it was a little hard to like Lucy. I did like the action in the book. I also enjoyed watching Lucy grow. There a bit too much misunderstanding and miscommunication in this book. I loved the twists. This story does pull you in and doesn’t let go. I loved the characters and the twists and turns and I recommend.