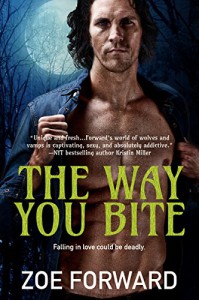 Dr. Vee Scarpa only had a short amount of time to get to her sister Brook’s  wedding.  Then one of the other Doctor’s  that was getting other hours to Vee and said there was a person in room one who refused to be helped by anyone other than the Dr. Scarpa. He was a new client. Vee was a vet but if she seen this patient she would be late. Only three more months and Vee could disappear by faking her death and go to the island in Southeast Asia. No vamps, no wolves, no forced marriage. Just her and the technology to let her know when a nonhuman entered her domain. Then Vee could reinvent her life again.  The man in the room was a Mr. Eric  Vorste. Crystal who was e tech said the man was odd and foreign and the dog was huge actually was a werewolf as was the man. The King of Werewolf’s  rumored to have eyes so light in color and this wolf had very light colored eyes.  Vee thought of a threat her father had said along time ago “ never get involved with them”. She knew she could be killed for helping by her father, although her powerful fiance would probably save her life but not punishment and her fiance was sadistic enough he would watch her father bring on said punishment. Her fiance was Ambroise DeFalco who preferred men.. Vee had a very complicated relationship with Ambroise. Roman was the werewolf’s regional primary care doctor. Vee asked why Mr. Vorste didn’t follow protocol and told him they were not safe being at her office. Then Vee also told Mr. Vorste they would have to see another doctor and not allow a shift to happen. Then Mr. Vorste asked Vee if her father Dominic and Ambrose  knew about the incident in California. Vee was the daughter of North American Vampire leader. The Vampires were at war in the United States Vee said she helped on a case to case basis with a referral basis only as a favor to Roman Vee felt murdering kids regardless of species wrong why she had tried to help in California and the only wolf to survive was about fourteen. The Vampire’s squad had ambushed the wolves right in Vee’s yard. Then Vorste brought up the fact that a wolf had supposedly murdered her mother but Vee knew that her mother’s murder had been set up to make it look that a wolf had done it. Ambroise stayed neutral in the war.  Then Vee’s mental scan revealed at least six wolves in the immediate area. Vee now knew her patient was Aleksander Dimitrov - the Werewolf King. Vee did know both Ambroise and her father Dominic feared the  Werewolf King.  Vee took care of the wolf and got the two bullets-  one in his left shoulder and one in his left thigh. Vee felt a strong desire for her patient which made no sense. Vee had never felt any attraction for Ambroise. Aleksander said he was called Lexan when he took human form. When all had been said and done Vee said “ let’s not run into each other again”. Lexan replied “ you’re going to need me”. Vee knew a connection had passed between her and Lexan and it had nothing to do with threats or blackmail. Lexan said they were to wait for Vee to leave before they did that way she would know they were still around and they would talk later. Lexan’s mother had died as a Vampire’s slave centuries ago. Lexan knew he wanted Vee but not as a one night stand He wanted to know everything about Vee : what she liked, how she tasted what noises she made during sex. He just needed to teach Vee how to handle her shifting from Vampire to werewolf  and put her in a country that wasn’t in the middle of the wolf hate zone. Velvet Scarpa was not Dominick’s biological daughter. Lexan had made a promise to a very ancient Vampire that he intended to keep. Vee’s biological father was Blaylock the very ancient Vampire Lexan had made a promise to. Vee was a healer but she would also be hunted and executed when Ambrose's father finds out she is not a purebred but a hybrid of an a vampire and werewolf. Lexan had never reacted to a woman like he had Vee. he was centuries old, this kind of crazy didn’t happen to him. Lexan had been captured by vamps and kept for one hundred years in chains and forced to fight other wolves. Her father had found out about Vee helping the Werewolf King. Dominic also wanted to inject Vee for forty eight hours with the treatment then Ambrose would have sex with her for three days if she lived through the meds she would get pregnant. Dominic and Ambrose’s father thought it was a good time for an heir Dominic was dancing with Vee and told her to leave but one of Dominick’s men stabbed before she took him down but she did get off Dominic’s estate. Trace was Dominic’s Captain of the guard but also Vee’s brother. Years ago Trace had taught Vee how to protect herself. Vee was not doing well with the injury when she got to her apartment Lexan was there and healed her. Vee didn’t know she was half werewolf and would be shifting with the moon in a couple of days. But like a werewolf she was also in heat. Lexan was there to help her through the shift and out of the states if she wanted to go. As much as Lexan wanted Vee to go he couldn’t force her. Then Lexan realizes Vee is his mate.

I loved. this story and the plot and pace of this story. I loved the action ,I loved the vampire vs werewolf idea and what had happened along time ago. Although I really prefer vamps and wolves being friends this was still great. But I also loved Vee learning she was half werewolf after she got used to the idea. I loved how she used her wolf to save one of Lexan’s Guardians. I loved Lexan and his  determination to keep Vee safe even putting himself in jeopardy. I wasn’t happy when Trace drugged Vee to get her to go back to Charlotte with her but I did love the fact it was to get their Aunt Carol who had basically raised them and then he wanted to get them out of the country. I loved how Lexan was willing to to give up being King for Vee. All and all just loved this book and didn’t find anything to complain about which is great. I loved the characters and the ins and outs of this story and I highly recommend.