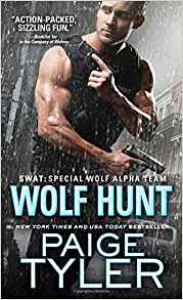 Remy was home in New Orleans with three other SWAT officers - Max, Jaden, and Zane. They were all werewolves. Gage was  their boss and pack Alpha. He had sent the men to cross train with the local tactical unit- New Orleans term for their SWAT unit. When in a bar with the guys Remy smells a tantalizing scent he can’t resist and started to follow it. His friends followed as he left the bar and started walking down the street . All the other guys denying the had smelt anything special. Then five blocks in and still going Remy realizes the scent is from a female. It was a spicy flowery scent  finally Remy found the bar it was coming from. Then he saw her on the dance floor with three other women. Then Remy realized he knew her from HS when she had been skinny and awkward and always looked down on the floor. But they had still been friends but now she was grown up and a beautiful woman. that was Trina but Remy didn’t know if she would recognize him . Remy hadn’t talked to Trina since HS graduation and he had changed a lot when he became a werewolf. He’d never felt anything like he did when smelling Trina’s scent the animalistic urge he had to track her down. Trina thought Remy was the sexiest man she had ever seen. Trina lived and worked in Houston and was home for the week to visit her mom. Remy was drawn to Trina in a way he didn’t understand.

I loved this story . It was great . It had a great plot and great pace. The book kept my attention from the first page until the last and I didn’t want to put it down. I loved how it was more than just a romance but had action and suspense in it. Including all that went with Trina trying to find her father’s killer and New Orleans cops trying to bring down a drug king and all else in this book.I loved the ending and everything about this book and I highly recommend.