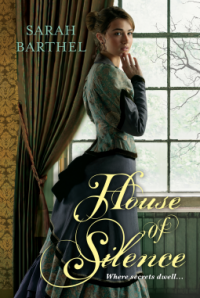 Before Isabelle’s  engagement  she had to chose between her best friend Lucy and her fiance Gregory. Lucy was secretly marrying the man- Patrick- she loved. Gregory wants to pursuit a career in politics and having close friends who eloped would ruin his chances for a nomination let alone a victory. But Isabelle felt she couldn’t give up Lucy. Isabelle pretends to lose it and is admitted to Bellevue Sanitarium to escape marrying Gregory as she fears him. Isabelle had seen Gregory kill a young woman. Neither mother or doctor believed Isabelle  and of course Gregory denies it. Isabelle can’t trust anyone so she pretends she can’t talk anymore.  Mary Todd Lincoln- Abraham Lincoln’s widow- following Abraham’s assassination Mary signed herself into the sanitarium. Isabelle and Mary actually became friends. Isabelle is treated kindly by Dr. Patterson but Isabelle can’t stay there forever. If it should get out Isabelle is insane she and her family will be ruined socially. Isabelle has always done what her mother and society expected of her.

I thought this was a good story. I felt so bad for Isabelle when she wasn’t believed by her own mother Then that she had seen the man she was to marry kill someone …. Then she was so desperate she pretended she could no longer speak and to go to a sanitarium to escape Gregory is sad as far as I  am concerned. I am glad I live in today’s world. I thought this was a fairly easy read but had a pretty predictable ending. But the ending seemed unnatural to me with everything just turned out fine for everyone.But this story did show how little control women had in this era. It was so sad how extreme Isabelle had to act to get away from Gregory then she still had to worry about it getting out she is insane or not only her but her family would be ruined socially.