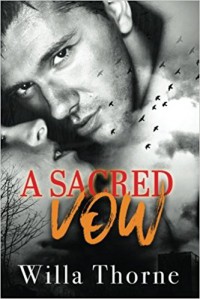 Julian had  made a vow to his maker that he would would kill alll vampire hunters from the Cormac's bloodline who had tried to destroy his coven. Julian has hated the Cormac bloodline for centuries. Julian is handsome,successful, and charming. Julian is very proud of his promise and thought he had fulfilled said promise. Then he met Aurelia/ Lia and found the telltale birthmark she was of the family which tried to wipe out his coven. Still Julian is drawn to Lia: for her strength, beauty, and her zest for life. Lia is naive but also strong, loyal, beautiful but she does still have some insecurities.  Lia brings out feelings in Julian that he hasn’t felt in over two hundred years. Lia gives Julian hope he can have what he lost so long ago- true love. Lia knows nothing of vows, vampires, and feuds.Lia also didn’t know she was a descendant of the Cormac bloodline.  All she knows is what she feels when she is with Julian. But Lia does know Julian has to pick between love and loyalty. Julian is very protective of Lia but still fights his urges toward Lia at the same time. He knows he should kill Lia for the sake of his coven. Julian weakens as Lia astounds him.Lia and Julian had an instant connection when they met. Julian’s love for Lia questions all he is and has stood for.

I adored this story. The minute you start reading this story it seems to engulf you and doesn’t let you go until the end. I loved that you got to read about Julian’s life before he was a vampire also. I some spots this is absolutely heartbreaking. This story has a lot of suspense, action and of course drama. I felt bad that Julian was so torn between his love for Lia and his loyalty to his coven and promise to his maker. I loved the plot the whole story actual and a bit of a different spin on a vampire story. This is a great read. I loved the characters and the ups and downs of this story and I highly recommend.