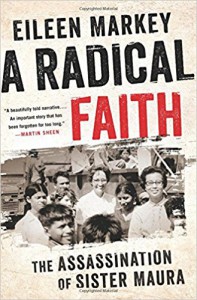 Four women were taken from a shallow grave each piled on top of each other. They had been buried that day by the local military commander. Two of the women appeared to have been raped. The woman had been missing for a day in a half. A veteran nun who had been working in El Salvador four years - Maddie Dorsey - fell to her knees. She knew this was a message to all who saw the woman. See what happened to her? This is what trouble makers get. Maddie was kneeling for the woman and all sisters. These women were U S citizens. Jean Donovan- a missionary, Dorothy Kazel- a catholic nun, Ita Ford was also a Catholic nun and Maura Clark was the oldest and been a nun for thirty years. Maura had lived and worked for seventeen years with the poor of Nicaragua then she had come to El Salvador and four months later she was dead from being murdered. This was not a random killing but done by a country’s army. Anyone who questioned the economic and political system in El Salvador could and usually did die. The commander of the base- Colonel Arbaiza did not like priest or nuns. Fr Lopez looked at the paper he had been handed one was his name and those of everyone who worked in the Parish were subversive per the paper and they were starting the killing today. Fr Lopez took the message to Bishop Damas and he had only held this position for nine months after the previous Archbishop had been murdered while saying mass. Rf Lopez ended back in Washington DC by the end of December. At the conference before their death the four nuns said how frightening it was in El Salvador but they wouldn’t leave. They actually pressed for more nuns as there was a lot to do with so many suffering people. The nuns were picked up at the airport by Dorothy and Jena and three hours later farmers heard the guns. The next morning on December third the bodies were found in a ditch. In the thirty five years since Maura and her companions were murdered they have become a symbols. Many forces- personal, religious, and political combined but Maura and the others in the shallow grave. This book examines Maura’s life to understand. Maura was raised on stories of the Irish Revolution. The circumscribed roles for the working class woman combined with a sincere desire to do good led women to the convent. The man who ordered Maura’s and the others murdered was trained by the U. S. military. But then the question was asked what were the woman doing in El Salvador? Maura rejected the innocence of blindness and she chose to act.  Her life and death raised profound questions about the intersection of religious conviction and political action. Maura was killed because of the work she was doing. Maura knew the risks and still went to help the poor.

This was a very strong book sometimes maybe a little too much detail but no way could I put this down. The faith and courage this woman as the others showed was just stunning. This book was so engrossing and moving and showed you who Maura was and even what helped form her. It shows Maura’s work with the less fortunate that ended with her and three others deaths and then tossed away like their life was worth nothing. But it was and worth so very much. In its own way it is a terrible story of a Central American governments oppression of it’s people with the support of the U S government. But most of all this book is about Maura and how she became this so very special woman of faith and the love she had for the less fortunate. I highly recommend.