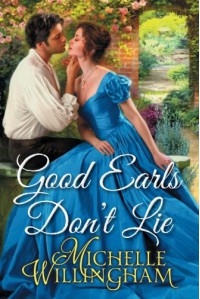 Iain ‘s head was killing him. The last thing he remembered was riding toward the Penford estate. He had passed by a grove of trees then was knocked from his horse. A horrendous pain crashed over him but he did remember voices arguing and shouting. Yet he was alone now. He felt for his brothers signet ring and it was gone and no knew him here. He had never left ireland before now. He had been the invisible spear but now he was the only heir with his brother’s death. Iain intended to prove he was a man of worth and rebuild Ashton and help his people back home and help his tenants in Ireland during the potato famine.. Iain had thought things would be better here but apparently not. The thieves had stolen his horse , his ring, the few coins he had carried, his coat, his waistcoat , shirt and even Iain’s shoes. Iain was now the Earl of Ashton but would people believe him when all he head brought with him had been stolen and his coach broke down.Iain’s younger sisters were depending on him to save their estates. Also Iain was willing to offer himself in marriage in hopes of a wealthy bride. His mother and sisters had went to stay with an aunt in New York. He had little to offer but his Irish charm and a decrepit castle and his title but he had to try. Iain would do anything necessary to form an alliance with Lady Wolfcraft. She Could bring Iain into her circle in London and introduce Iain   to potential brides. Iain came to a hedge with a maze and at the end it opened to a green lawn. A lovely lady lady seated a book beside a book beside her. It was Lady Rose Thornton and she noticed a man in her garden. Rose had taken sick six months earlier and is trying to get her strength back to walk again. Lady rose’s family had a lot of issues: a  mother with some kind of mental disorder, a married sister who is desperate for her missing husband to return to India, opinionated servants, roses handicap, and missing rents. Rose and Iain make a deal to help each other as Lady rose needs help to walk again and Iain needs to be taught to be a gentleman.

I had mixed feelings about this story. I thought there was too much made of whether Iain is the Earl or not. Characters weren't as interesting as they could be. `But I did like the  plot . I also liked that Ian was willing to do whatever he had to as long as he could help his people. Also that Iain and Rose made a deal to help each other. Important events in this story seemed to be missing parts in this story and I didn’t like that.  The story also dragged at times. So there were parts I liked about this story and things I didn’t care for or liked in the story