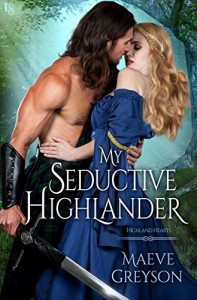 Graham was caught in bed with a rival laird’s - Buchanan - wife and mistress. Graham was to be exiled from Scotland or executed he was sent to the future if he didn’t fulfill his mission he would be brought back and killed. So graham had to go to the twenty first century from the thirteenth and find Lilia and make her fall in love with him. Marry her and make her happy. Her granny had a vision that graham would be her husband. Lilia lives in the twenty first century but her sisters live in the thirteenth even her twin Mairi. Lilia has prophetic visions and usually it’s bad news. She has to bear  what the visions show her except telling her two friends who don’t really believe her but still support her. Granny and Mairi were worried about Lilia as the woman- Eliza MacTavish-  who had been watching over Lilia is dying from cancer and is in hospice. Lilia can also read people’s true feelings and can feel what they really feel. Graham is to marry the old pagan way blood mixing blood. The Sinclaire women are time runners so they can go to any period of time. Lilia is part owner of a natural beauty company . then Lilia finds out her partner is embezzling the company and has him put in jail. Then her two closest friends Vivienne and Alberto become her partners.

I enjoyed this story a lot. At times it choked me up and brought tears to my eyes and it also had it’s humorous parts. I applaud the author good writing when  a story pulls out my emotions. At time this story was slow moving. Usually don’t like time travel stories but I really enjoyed this one. I really liked Lilia’s character. I like how her friends supported her even if they didn’t believe she really had real visions. It had a good plot although Graham was quite the player in the beginning of this story. I was glad he changed and did as he had to do to stay alive. But was it such a chore for him? I don’t really think so. Funny had he reacted in the twenty first century. I liked the characters a lot and loved the ins and outs of this story and I recommend.