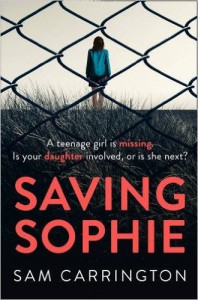 Karen was on the couch and then Mike answered the door. Karen went out to find Sophie between two cops. Sophie was Karen’s and Mike’s seventeen year old daughter. Sophie wants to be her friend Amy. Karen had been attacked two years ago and why Karen was how she was. Karen has agoraphobia she only leaves her house for counseling. Sophie had no memory of what happened after 7:00 pm so she says. Karen had texted Liz -Amy’s mother the night before and found a text from her the next day saying Amy hadn’t come home and was not answering her phone. Amy is now missing and Karen feels Sophie is hiding something. Then a body is found but it’s not Amy but Sophie’s other friend Erin. Karen and Erin’s mom are best friends but Karen can’t go to her to try to offer comfort because of the agoraphobia. Then Sophie admits she is being stalked could it be the person who killed Erin . Sophie is also getting creepy messages and photos on her phone. Also Sophie’s friends are acting weird.

I had mixed feelings on this story. It had a pretty good plot but I had trouble reading and following the story. Also the story just doesn’t ring true and i don’t find it believable. Why weren’t the cops called there had already been one murder especially after Sophie felt she was being stalked and getting weird things on her phone. But this story did have: intrigue, lies, deceit, family situations, panic attacks, agoraphobia, secrets,  murder, weird things happening, and a lot more. I felt Karen and Sophie could have done more to get out of the situation.I also didn’t like Mike at all. But this did have a lot of twists. Just wasn't quite for me.