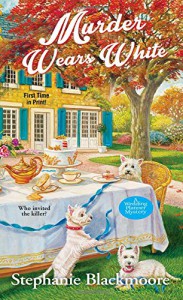 Mallory inherited Thistle Park from her ex fiance Keith’s grandmother and still has to deal with Keith and his mother Helene. Mallory is having the mansion remodeled into a B&B she hopes to open when she does her first wedding in her new wedding planning business. Mallory’s sister Rachel  is helping her to do the remodel. Jesse is a contractor and his crew have their hands full with the remodel. Jesse mom Delilah is a witch. Someone is sabotaging the repairs and stealing tools while Jesse is trying to get the remodel done. Thistle Park is rumored to have a ghost-Evelyn   Garrett with all the mysterious activity in the house Mallory has to call Howard Heyward and the Post  Guenez Paranormal Society.  Whitney booked Thistle park for her wedding in eight months but comes to Mallory and she begs to be able to move up her wedding so her dying father can be at the ceremony. Mallory agrees and then finds herself and her family in an old murder investigation and a new murder investigation when Whitney’s Aunt Lois.drops dead from food poisoning at the food tasting part of the wedding preparation. Mallory’s wedding planning business is off to a very rocky start. Mallory is investigating a new and old murder, battling with the Planning Commission, has a realty ghost hunting program in her butt, and a bad relationship with her ex fiance Keith and his new fiance Becca. How much more can Mallory handle. But this is not the first murder in Whitney’s- the bride- family Her mother had been murdered years ago and the murder wasn’t really solved. Mallory’s boyfriend is the defense attorney for and Garrett thinks he  the man who is currently being held for murder and Garrett thinks he is innocent. Mallory and Garrett start their own investigation into these murders. However the killer plans on Mallory never solving the mystery. Mallory also is getting anonymous letters.

I really liked this story it had so much to offer. And I enjoyed reading it. It had a great plot and was written well as far as I'm concerned. I like how Mallory handles herself and starts to try to find out herself who the killer is. This is fast paced and at times made me laugh out loud and that always good. But there were a few too many plots and sometimes made t hard to keep up. I enjoyed how Rachel and Mallory interacted with each other also. Also would have liked a little more focus on Lois’s background but otherwise I had no problem and thoroughly enjoyed this story. I loved the characters and the ins and outs of this story and I recommend.