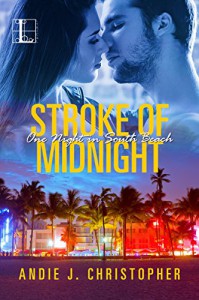 Alana was still at the office at 10 p. m. on New Years Eve and her sister Carla kept bugging her to go out with her. Alana’s brother Javi only seemed interested in alcohol and women since he caught his soon to be ex wife cheating on him. Alana had been picking up the slack for Javi in the family business. Soon their father would be retiring and Javi was suppose to be taking over but if Javi didn’t change it would only get worse for Alana. Alana wanted Javi to be her big brother again not who he was being now. Carla who was Alana’s sister didn’t realize that she had the privilege of working part time as a interior decorator and full time party girl because of Alana’s efforts which Alana doubted her father would even notice since she was a girl. Then Carla asked Alana just to go out with her from eleven to midnight and Alana agreed . even though Carla was engaged and should be with her fiance. Cole was waiting back for a text from Javi as he had invited Cole to Miami for the holidays as Cole didn’t go home any more after his fiance cheated on him when he was deployed and then publicly humiliated Cole when he came home. Javi wasn’t answering Cole’s texts and Cole didn’t want to just sit in his hotel room so he ventured out. Cole had been a Navy Seal but he had gotten injured and he was no longer fit enough to continue as a Seal. the injury messed up Cole’s shoulder and ended Cole’s planned military career and left Cole without a purpose or plan for his life. Alana wanted to go home the minute she stepped into the Clevelander. Carla told Alana she was funnier after she did some shots of Tequila and had four shots each ready for them. Alana felt an appreciative look from a guy across the bar and Alana felt herself smile at him. The man seemed to only have eyes for Alana had never looked at someone and wanted to rub up against them before. The man came toward Alana and the countdown for new Years began. Then at the count of one the man reached down and kissed Alana . Alana had never felt so safe in her life yet also her mind and body so filled with desire. Alana knew that going home with a stranger was crazy but Alana’s gut told her the man wouldn’t hurt her. Alana was going to have a one night stand with a stranger and that was so out of character for Alana. She needed a night of pleasure and fun. Cole fell asleep near dawn and Alana dressed and left. Javi finally texted Cole and invited him to a party at his family’s home.Cole had grown up on the wrong side of the tracks and lived in a shack. Cole’s father had been abusive and his mother was either drunk or drying at on a tattered couch usually with a black eye. It had been plain to everyone else that Javi’s ex Karrie liked Javi for his money and what it could by her but Javi hadn’t seen it that way. Karrie was actually in love with her trainer. Then Cole was being introduced to Alana at Javi’s parents house. Alana was Cole’s best friend's younger sister and he had just spent the night with her. Javi and Cole usually picked up women together. Cole felt he wasn’t good enough for any woman as the two women he had allowed himself to care for - his mother and Beth his ex- hadn’t really wanted him as he wasn’t good enough.After that Cole hadn’t opened himself to another woman .But Alana reminded him of all he was missing. I really loved this story. I mean the best friend’s sister has been done a lot but it didn’t stop me from loving this story. I loved how Alana and Cole became more than a one night stand.i also loved how Cole not only wanted to have sex with Alana but liked her and wanted to spend time with her talking and doing things besides sex together. I think Javi acted naturally as the big brother. I felt bad for the hurt Cole had felt from his mom and Beth. this was just a good read. I loved the characters and the ins and outs of this story and I highly recommend.