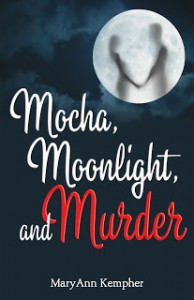 Katherine was going to her first night of class. She had seen a guy the day before at Starbucks today he was in class but in drag his name was Scott and he was her partner for a writing project that would be seventy percent of their grade and this was from a history class. Christian knew his mom was leaving and he was almost nine. What he didn’t know was his mom wouldn’t be back. Then christian was taken inside by Sister Ann and later that day he met teddy and Stephanie who were brother and sister and also stayed there. Katherinne could not sleep that night and decided so Katherine decided to walk to the diner it wasn’t that far away. A couple of blocks away Katherine seen a man holding what she thought was a mannequin but then the blanket fell and Katherine could see a head covered in blood and she took off running. The man chased Katherine but she had run track in HS and she got away. Katherine called the cops and they went to the house and found the body . Katherine was told by Detective Nolan she had to go to the police station . Katherine had a job as a administrative assistant at Avalon Apparel. Katherine was soon to be divorced. Scott’s new supervisor was Will and Scott would be working with life insurance policies. Scott and Katherine met for lunch and he asked if she heard of the lady’s murder. Scott’s best friend was Jason, they had been friends since freshman year in HS. Scott had been engaged to Kimy, they had been together for three years but then he broke the engagement, Sophie and Teddy had been the constants in Christian’s life beside the nuns. Now Christian was eighteen and leaving to share an apartment with Teddy and Sophie. Katherine walked past the house she’d seen the killer unknown to her the killer was in the house and seen her. He also followed her at a distance. Scott and Katherine had became good friends as they spent time on their class project. Then Katherine seems to be having a close call like slipping on a staircase, nearly hit by a speeding car, carbon monoxide leak to name some. Then there is a new handyman that flirts with Katherine. Katherine’s Katherine’s estranged sister Amy shows up with Michael who had been a co worker Scott stays by Katherine’s side.

I like this story like the characters a lot. I liked Katherine’s determination to find a little normalcy and finished her degree and to decide what she was going to do with her life. I also liked Scott The plot was good. The story was a little slow at times but I did get past that. I loved the twists and turns of this of this story and I recommend.