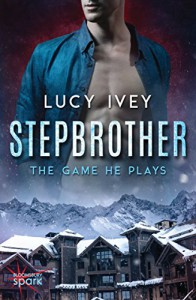 Karley had to spend Thanksgiving vacation with her mother , stepfather, and two step brothers: Joe who was two years older than  Justin. This was the first time since Karley’s mom - Sandy- had cheated on Karley’s dad and left them to be with Bill and then marry him Bill owned a resort and spa and was very rich. Karley had refused to go to her mother’s wedding. Joe and Justin came home from college for vacations and holidays. Every time the boys were home something bad seemed to happen. Karley was attracted to Justin right away and he seemed to feel the same way. But Karley was still a virgin even though she too was in college. As time went on Justin made her burn to be touched but there was also something about Joe. Most of the time Joe seemed to hate Karley but at other times …. Before everyone had to leave to return to college Justin asked Kaeley if she would miss him . they became a couple and talked every night before Karley was to return for Christmas vacation as once again her dad said he would be away on business and Karley was going to work at the resort. Karley made friends with Gray and Ryan and their little circle at work. Ryan was older and already graduated college so he was more mature. Ryan also started liking Karley for more than a friend before he knew about her and Justin. Ryan gave Karley a ride home from work the night Justin and Joe were to come home . Sandy was always late picking up Karley so Ryan stepped in. when Ryan pulled up to the house with Karley Justin was already home- early and was waiting for her and Justin was very angry. Karley explained her and Ryan were only friends but Justin didn’t seem to want listen to her. Then another girl was found dead near the resort and that was three females found dead near the resort in the last two years. Justin told Karley Joe was all messed up as their mom’s boyfriend had murdered her and Joe had to kill the boyfriend or he would have killed Justin and Joe. Justin and Joe were very close and seemed to do most everything together. The two brothers protected each other.

This was an awesome story the only problem I had is you knew almost immediately who the killer is . but that just didn’t really take away from the story. This wasn’t a real long story but it had everything it needed in it. I was hooked by the second page. I didn’t want to put the book down. I loved the plot and the characters and the ins and outs of this story. I highly recommend.