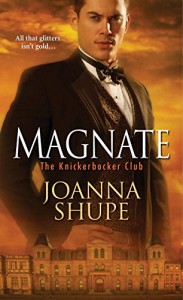 Lizzie was ready to pursue her hopes and dreams so she was in the mansion of one of the richest men in the world. Emmett was a steel magnate who had forged his empire through daring, determination, and sheer guts. Now Lizzie wanted him to take a chance on her Emmett owned East Coast Steel but Emmett was also Lizzie’s brother William’s friend. Emmett was known for dating actresses but the relationships never lasted very long. Lizzie needed a partner who was wealthy and influential to help her get her business going. Emmett wondered why Lizzie needed a partner. Why Lizzie didn’t go to William as he owned North east railroad Company. Emmett brought up Lizzie turning to Henry the man she was almost engaged to. William and her best friend Edith- who is Henry’s sister wanted to see Henry and Lizzie married to each other. But Lizzie hadn’t decided yet about Henry. Henry’s view about women in business was not progressive. Lizzie wanted to open a stock brokerage firm. She tells Emmett she needs someone with capital and high profile enough to help her lure clients. Lizzie would be the one advising on all the trades. As far as male clients went she would keep the fact she was doing the advising until they were comfortable working with her. Then Lizzie would hire a young man to represent her on the exchange floor since a woman isn’t allowed to trade. Lizzie had a ledger she had been keeping for four years which showed her abilities in ink. Emmett told her no but as she absorbed the answer he thought how beautiful she was to have a brother like William. Emmett did know anyone he hated as much as William. Emmett hadn’t met anyone as quick with numbers as Lizzie in a long time. When Lizzie asked Emmett why he had said no he couldn’t explain that talent only went so far in business more important was owning a lack of scruples and ever ready supply of favors you can call upon at a minutes notice. Emmett told Lizzie it is a nasty cutthroat business- bribes, lying, and cheating. Emmett found he liked Lizzie and was surprised at how much. Lizzie makes a bet with Emmett and he agrees. He also wanted dinner at Delmonico’s  where all N Y society would see them together.

I liked this story a lot. I like the loyalty Lizzie portrayed to her brother and his business. I like that she actually had the nerve to go to Emmett about a partnership. I like how Emmett didn’t reveal what he knew of William and he didn’t want to tell her how ruthless business was. I found Emmett's character in this. I loved the characters and the plot. I liked the ins and outs of this story and I recommend.