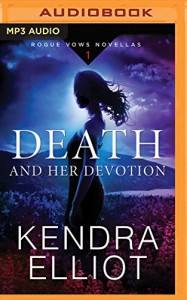 Solitaire hadn’t had a murder since December and then Stevie just got notified there was a body at Crying Indian Campground. It was in the woods. Stevie was to get married this weekend, Stevie was actually happy that she could avoid all wedding talk for the next ten hours. Zane was Stevie’s fiance and the police chief. It turns out that an A list actor Chase Ryan had been murdered. Chase was the star of a national detective  television show  and Chase’s body was posed in the same way as a  crime Chase’s character had investigated.  Chase was with his brother Spider and two childhood friends Josh and Toby and Spider’s son Brandan for a week of camping. Once the word gets out Solitaire’s is over run with all kinds of people include paparazzi  and news media from all over. Zane and Stevie get together a long list of suspects who all seem to be hiding  something such as: Chase’s manager, a stalker, and fans of the show to name just a few. Also the people Chase had been camping with all painted a different picture than the cops were finding out. Then the night before Stevie and Zane were to get married the reception hall is set on fire and burned down to the ground.

I loved this book it had a little of everything in it : a small town, close family, betrayals, secrets, lies, murder, intrigue, a popular actor, paparazzi, many suspects, a stalker, romance and so much more. This novella was a quick paced read. I really enjoyed the twists and turns of this book as well as the stress of a coming up wedding. Where this gets really heptic when the reception hall burns down which starts Stevie wondering if the wedding should be cancelled until after the murderer is found. Stevie has a good heart and mine went out to here the stress of the wedding and then a murder. This story definitely drew you in and kept you until the end of the book. I didn’t realize this was the first part of a two part story or I probably would have waited to have both parts before I read this. There was questions still to be answered. But the writing was very good as was the plot. The characters were great and the ins and outs are also very good. I highly recommend.