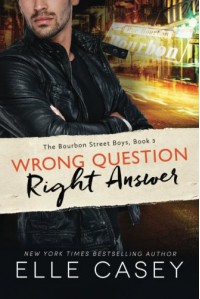 Toni is at the bar waiting for the rest of the team to get there. Toni is drinking Long Island Teas. Toni is at the bar to celebrate with the team successfully finishing another mission. Toni is with The Bourbon Street Boys. Ozzie is the leader of the team and Toni used to go to Ozzie to talk about anything bothering her but now Ozzie has May. Toni has known Lucky since they were kids When Lucky and Toni had kissed in Jr High Toni has stayed away from Lucky more or less but ten years later she hadn’t forgotten that kiss. Lucky’s sister Maribelle  had committed suicide two years ago.  and he never got over it but his last thread to her  Toni had killed her boyfriend Charlie and shot him five times as he had beat her several times and seriously hurt her. In a few years it will be the anniversary of Charlie’s death and Toni is drunk and tries to call Charlie’s brother Rowdie and hope he or any member of Charlie’s family  will tell Toni he forgives her so maybe she can start forgiving herself. Charlie had died five years ago and Toni had been out of prison two years.   Lucky takes  Toni’s  phone  and refused to give it back to her.  Then Lucky suddenly kisses  Toni.  pushes away from Lucky and hits him as she feels Lucky is casually playing with her heart. Toni runs outside and gets in a cab that Ozzie had hired and paid for so that his team got home safefully. Lucky jumped in the front seat and gets out at Toni’s house also. The next morning Lucky is gone and lets Toni know when she calls he needs to be away for awhile.

I liked this story alot. The story has alot to it. The plot was good as was the writing. The story grabbed me right from the start and kept me interested until the end. I loved how Lucky and Toni both started to heal. The characters were absolutely awesome. I felt like I was there with Toni and Lucky and the team. I also loved the twists and turns of this story and I highly recommend.