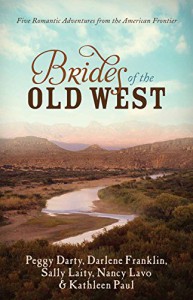 In one of the story’s Suzanne is out checking the fence when she sees a man on a horse and the man is almost falling off his horse as he gets closer Suzanne sees red on his shirt she is not even sure she can get him back to the ranch alive. She finds out when he is in better shape his name is Luke he had won at poker then  he was shot and robbed oh his money. Luke is better now but has lost his faith. Suzanne on the other hand has had alot of bad things happen but still has a strong faith in God. She kept her faith even through all the strife she was going through. There is another story about Blanche and she has inherited money from an unknown father but she has to follow some stipulations: one was knowing her dads boat would reveal alot to Blanche. A third story is about Amanda and Sara Jane who had recently buried there father in Missouri on their way to Oregon. All they really have is each other. The wagon train master won’t let them join alone so they follow behind. Sara Jane and Amanda have faith that God will get through all that happens on this very hard trip. The fourth story is about Luke who was a half breed and had never known any kind of love or even affection. Deborah’s uncle Cyrus had given him the only home he had ever known at fourteen. Deborah toke her seven year old brother Case who had been through alot with their home burning and his own physical problems . Luke and Deborah met where he considered a rest place. Not a very nice place and dirty. Luke and case become friends. Even though Case has been looked down upon by most and has physical limitations he loves Jesus and has a very strong faith. Luke won’t leave Deborah and Case alone it just wouldn’t be right. The fifth story is about Tildie who has had a very tough life . Her family had all died from illness. Tildie is with her aunt and step uncle who is a very good man . She is traveling with her  aunt and her aunts family when there is an accident and when she wakes up she is in an Indian camp. Her aunt is dead and john her husband is dyeing but as bad as he was Tildie lead him to God before he toke his last breath. Tildie three cousins are still alive and Okay. tilde meets a missionary his name was Jan and as time goes on he loves Tildie and the three kids who have also lost so much and this is about the hard journey back to civilization and Tildie wondering how Jon a man of God could love her and the three kids that aren’t his own.

These stories were all great and very inspiring even if in a time long gone by. What people endured then yet kept their faith in God was stupendous. There was a mix of stories but all had good plots and ups and downs but with God interweaves into the story, I loved all the stories and I highly recommend.