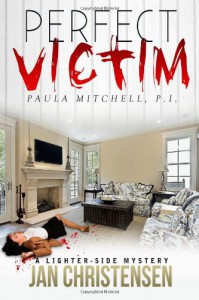 Paula is a private detective and went to the police station to talk to Warren Wade who had been arrested for the murder of his ex fiance Sylvia. Sylvia had been killed three nights before with q fire poker that had warren’s fingerprints all over it. Sylvia told warren she didn’t love him any more and broke the engagement but Warren said she had been acting a little strange while she was telling him. Warren states he did not kill Sylvia and Paula believed him. Warren was a rich man who really didn’t work but did love computers. Sylvia’s best friend was Amity they had been best friends since grade school. Sylvia had worked at a newspaper office. Sylvia and her mom argues some as still tried to control Sylvia and her mom didn’t like Warren. Steve and Paula were lovers and he sometimes help her with cases. Then Steve is attacked while trying to help her with Warren’s case he was put in the hospital. Another of Sylvia friends was killed her name was Glynnis it was the same way Sylvia was killed. The police still would not release Warren.

I liked this story alot, it had plenty of action and had a very good plot. There was even some humor in this story. However it was a little slow in spots but i got through them. This is a quick read. I was sucked into the story and stayed there until the end. I loved the ins and outs of this story. I recommend.