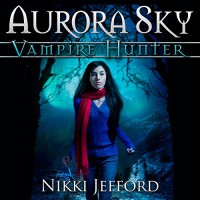 Aurora is in HS and was already accepted to Notre Dame and only six months until graduation. Aurora could not wait to star life in college. Aurora was in a car crash and when she woke up she was at Elmendorf A F base.There was agent Melcher with her when she woke up. Aurora was told she was at the base because she had special blood. She had been at the base for two weeks in a medically induced coma. Then her mother  told Aurora she could take her home in one week. Agent Melcher brought in Agent Crist with him. They told Aurora had been revived and that she had a chance to serve her country as well as mankind. She was a deadly force against demon beings. Aurora’s blood is toxic to vampires and she is expected to become a vampire hunter. Surprisingly enough Fane starts to take interest in Aurora once she is back in school and there is chemistry between the two.

I really liked this story alot. But i will never give a story I rate a five when it ends in a cliffhanger and this one did so no five. Anyway vampires made by science and different kinds of vampires very interesting and definitely different and I liked that. The story grabbed me right from the start. I hope I get to read the second part of this I was so disappointed to find this a cliffhanger. I didn’t particularly care for the agents but I guess that is how they were suppose to act. I loved Dante and how he handled things and just the way he was. Dane well he was Dane but I did like the gradual build up between him and Aurora. I would have liked a bit more action in this story. I did love the twists and turns of this story and the ones Aurora went through. I recommend.

I received  an ARC of this story for an honest review.