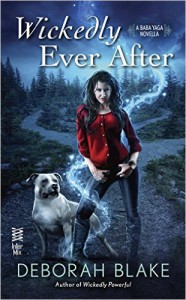 Barbara Yager was a Russian fairy tale witch. Her job was to keep balance of the natural worlds- guard the door between the human lands and the other world. Baba Yaga known as wicked witch in Russian fairy tale. Laim is human and a sheriff. Liam and Barbara and Babs- adopted daughter have formed a family unit. Barbara has to go to the other world to ask the fairy queen to bless their marriage . This blessing is the only way Liam can drink from the water of life and death to lengthen his life to match Barbara’s. The Queen gives Barabara three impossible tasks to complete in two weeks. Chudo Yuko is a dragon / dog who is also part of Barbara’’s family. The three impossible tasks are:- 1-  Catch the song of the ocean in a bottle, -2- bring the living representative of a dead species, and -3- find a human heart that is so pure he/she never spoke a lie. While visiting friends to try to get some help for these tasks Barbara met a third Baba Yoga.

I really liked this novella. I have not read the other book in this series but I will now. This was an easy read. The plot was good also. I laughed at different parts of this story. I like the ins and outs of this story and I recommend.