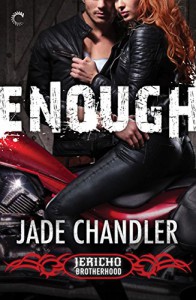 Lila had a chance to start over again.she had worked at a different tattoo shop but had slept with the boss - Tony- who was both verbally and physically abusive. Lila was a natural redhead and everything that went with it.She then got a job at a tattoo shop in a small town that was owned by the Jericho Brotherhood M C. Jericho had hired Lila half way through a phone interview so here she was. There was a apartment above the shop she could live in and a very good wage thrown in. Lila was cleaning up when Dare came in he ran the shop as well as being a tattoo artist. Dare was very tattooed and Lila instantly wanted him but he was the boss and she had promised herself a new start and that wouldn’t happen again. Dare wanted her also and after one kiss Lila had all she could do  to say no but she did and Dare respected that. But then after talking to a waitress that had become a friend she decided to go for it. Just good sex no strings attached. Lila thought she would be okay but as time went on her time with Dare became more and more precious to her. Lila was really settling in to her new life but in the back of her mind she felt eventually Dare would tire of her and she would have to move on.

WOW what a great story. First off alot of really hot sex in this story with a side of safe kink shot in. But this is also a story of two wounded people who don’t share the very depth of their souls and only then could they really heal. I liked the showing of the M C’s businesses. That were legal no guns or drugs or prostitution.But alot of drinking and Lila doesn’t drink but she still does fine. I loved the humanity in this book. Bad Bikers but they have hearts. I just thoroughly enjoyed this. It toke me a bit but read this in one setting good thins was a weekend. I loved the twists and turns of both the story and that Lila and Dare go through. I highly recommend. I hope to get to read the part of Rock and Avery’s story I am psyched.