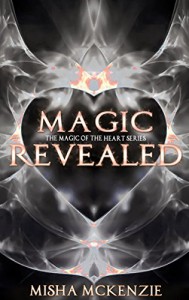 Stacia awoke in a strange bedroom and wondered how long she had been unconscious. Then Stacia heard a voice in her mind, it was the voice of a man she had been dreaming about for almost two years. Stacia had been raised vengeance was her life that was all there was. Then Stacia realized she was with the famous Gideon Marquand. He was the most powerful witch born in two centuries. The man she had vowed to destroy. His coven had murdered her family. Gideon told her that her real name was Lauren Donnelly but she called him a liar. Gideon knew that Lauren had been brainwashed for twenty years. Gideon could astro project and went to his father for help. It had been two months and he had gotten nowhere with Stacia/Lauren, she was still trying to kill him and getting very inventive at that.

I really liked this story . I think the only thing is I wish there was a bit more conflict/action. But besides that i really enjoyed this story. I felt bad for all Stacia/Lauren had been through and what her own father had done. I liked the characters especially Stacia/Lauren and all she went through to finally become who she was meant to be. I also liked Gideon a lot and all he put up with for Stacia/Lauren. I recommend.