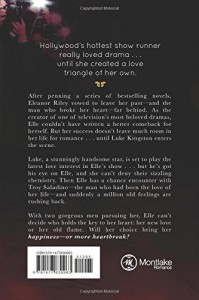 Eleanor/Elle   had created the character of Riley, and was head writer and showrunner of “ Follow The Sun” the most popular television drama. Elle was also a perfectionist. The show was based on her novels. It meant everything to Elle. Trey had broken Elle’s heart and that is what the show is based on. The scenes had to right because if Troy happened to watch her show it showed she was whole, fulfilled, and satisfied. Linus was Elle's terrier and she had just turned 35, and was celebrating at home with Linus. Ten years before she had married and it lasted thirty six hours. Elle's best friend was Whitney and even she didn’t know everything. Troy and Elle had became friends in ninth grade and together most of the time their teen years. Then Nolan her show's male lead announces he is leaving the show but Luke takes his place once he is gone. Elle and Luke have some hot chemistry between them. Then Elle and Luke go to a famous restaurant and encounter Troy as he owns it. Now Elle is very confused about what to do.

I loved this story. I thought the plot was great. I was ready to hate Troy when he came back into the picture but he did win me over. I truly enjoyed this story and the characters were excellent. Especially Elle and all the twists and turns she goes through.  I highly recommend.