An Excellent Anthology To Bring On The Holiday Spirit 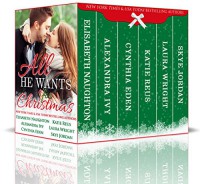 Ella McKinley is a widowed bar owner in Holly, NC, a town 100% dedicated to Christmas and all that entails. It is the place farthest from where she ever thought she’d run into her one great love. Until she comes in one evening and sees him singing in her bar, looking far better than she remembered from years before.Now it’s up to Tate to find out why she left him and refused to look back.

Meg finds herself back in Holly after trying it in Las Vegas. After getting her heart broken and her grandmother dying, she was more than happy to come back. She now owns the local flower shop, although local vandals keep messing with her property. Dylan Cain regrets using Meg on an undercover FBI sting, especially after she captured his heart. Now that he’s done with the FBI, he’s made his way back to Meg to convince her and protect her.

The Spy Who Came For Christmas-Cynthia Eden

Jemma is the timid chocolate store owner whose afraid to even go on more than one date after a tragedy that happened in college. when Grayson Cole blows through town on a quiet break, it’s love at first sight for the both of them. When trouble follows Grayson on his vacation, he must protect Jemma at all costs.

Nora Cassidy is the local bookstore/coffee shop owner and guardian to her teenage sister. A few months ago, she started talking to Jackson O’Connor. After a steamy date a few weeks prior, Jackson blew her off. Now he’s back and begging for a second chance.

When Carol was a teenager, she saw a fellow classmate after he had been abused by his foster father. Even though the boy told her to let it go, she rushed home to tell her parents and then the boy and his foster siblings were taken away and never heard from again. Years later, Carol is now the local gift store owner. When Gabriel shows up as a success after so many years, he’s intent on capturing Carol’s attention. Only, she has no idea why.l

Meier Grant is an all-star hockey player and is used to getting everything he wants. After an injured shoulder sidelines him, he finds himself dragged back to his hometown and everything he hates about it. When he sees an old classmate Faith, the owner of the hardware store, he thinks he can finally show her up. When she seems unimpressed with his superstar status, he does everything he can think of to get her attention.

Normally I would review each story individually in an anthology, but this one moved so seamlessly from one story to another that my review would be exactly the same for all of them. I really loved each of the individual stories, how each one had its’ own uniqueness as well as a bit of Christmas magic. The only complaint I would say is that one or two of them had the characters “murmur” everything. This is a pet peeve of mine when an author does this as nobody murmurs all the time. However, even this little irritation took nothing away from the book. I highly recommend it for anyone who has a Christmasy is ready for some holiday magic.