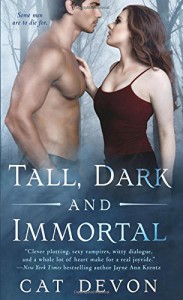 Alex Sanches is a detective for Chicago PD. He also happens to be hiding the fact that he's a vampire. When reporter Kiera Turner barges in on him demanding answers for a series of robberies and accusing him of being said vampire, he does the first thing that comes to mind, he kidnaps her and brings her back to the territory he lives in. 24hrs ago, Kiera was blissfully ignorant of the supernatural world. Now, not only does she find out that there are vampires, demons, and witches, but she's the granddaughter of the most feared vampire hunter and attracted to the #1 vampire on her grandfather's hit list.

This was a fast paced story with many quirky characters. The chemistry between Alex and Kiera is quick and fierce, no matter how much he tries to deny it. Watching Kiera as she learns this new world was definitely interesting. I'll probably never look at the Wills Tower the same:)  Great story and characters. I recommend it to anyone that likes this genre.