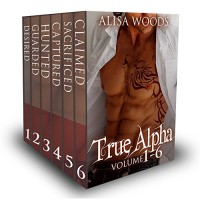 Mia is a shifter, trying to deny that part of herself as she works her way through college to take care of her mother. Lucas is a very broken alpha without a pack. While he still works in his fathers company, he's now a lone wolf, forcing his way through life until one night he rescues Mia from being attacked by members of a rival pack. Both of them are very surprised the following Monday when she's his new intern. While their attraction is explosive, Lucas is too broken to mark her. Once other wolves, including the rival pack, realizes what Mia is, it might be too late.
I liked how both lead characters were written. You could really feel Lucas's pain as well as his inner struggles over his attraction to Mia. I liked Mia's determination to overcome her circumstances. The only thing about Mia I didn't really care for was how she continually tried to push her submission on Lucas when he obviously didn't want it and wasn't ready.
The only thing overall I didn't like about the book are the submission rules. I know it was a plot point, but I just didn't care for it.
Overall though, well written book. I highly recommend it to paranormal fans.